CBBC (Children's British Broadcasting Corporation AKA Children's BBC) is the brand-name for the BBC's children's television programmes which are aimed at children aged between 6 and 14 years old. The Children's BBC name as a dedicated programming strand began on 9 September 1985, with the CBBC name used informally since 1990. This became official with a relaunch of the BBC's branding in 1997.

CBBC programmes are shown on BBC One, BBC Two and the CBBC Channel. CBBC has a sister brand, CBeebies, for children under 6. The CBBC brand for BBC One and BBC Two are known as CBBC One on BBC One and CBBC Two on BBC Two.

CBBC comes under the control of the BBC Children's department, who are responsible for creating programming for children up to the age of 16. It is based in the East Tower of the BBC Television Centre, with some programmes coming from Scotland and Bristol.

The department splits output into age groups, with CBeebies for ages up to 6, the CBBC brand for ages 6 to 12, and BBC Switch, for ages 12 to 16. Cbbc also manges and updates a website: CBBC Website.

CBBC produces a whole range of programme types, including drama, news, entertainment, educational programmes and what is known as 'contemporary factual'.

From launch until 1994, links between programmes were usually broadcast from the NC1 (BBC1)continuity suite]], dubbed The Broom Cupboard. It was kitted out with a set and was fully operational, with the presenter actually operating the vision mixing and audio consoles. By 1994, the operation was expanded; Presentation Studio A was used until 1997, before moving to the purpose-built studio TC9, near the Blue Peter garden at BBC Television Centre. During a brief period of expansion in studio facilities in 2005, links for BBC One and BBC Two utilised studio TC10 (on the sixth floor of TV Centre, and originally news studio N1), whilst 'The Channel' became the sole occupant of TC9.

The last live continuity links from TC9 were broadcast on BBC One on Friday 1 December 2006, presented for the final time by Angellica Bell and Simon Grant, who left CBBC without being replaced, leading to a reduction in the number of studio presenters. Between Monday 4 December 2006 and Thursday 6 March 2008, all CBBC Presentation output on BBC One, BBC Two and the CBBC Channel was produced from studio TC12. This has since been replaced by a new facility in the East Tower of Television Centre.

From 4 December 2005, CBBC continuity was presented from a small CSO studio by Gemma Hunt and Anne Foy. During Christmas, Level Up presenter Ayesha Asantwaa fronted weekend links. Hunt covered BBC One links and Foy presented links for the channel until February 2007 when the duo switched presenting duties. Comedian and BBC Radio Lancashire presenter Ted Robbins freelanced as a presenter during February half-term and the summer, appearing as The Governor from The Slammer. The CSO presentation format was discontinued on Sunday 2 September 2007 with Gemma Hunt making the final announcement from the set-up.

Monday 3 September 2006 saw the fifth CBBC relaunch.As part of the relaunch, new logos, indents, interactive services, programmes and presenters were introduced. The previous CSO computer generated backgrounds used from December 2005 were replaced by a real set. Its design is a reflection of CBBC's roots, with a similar set up to the original Broom Cupboard.

Ed Petrie became the chief continuity presenter, accompanied by puppet sidekick Oucho T. Cactus (operated and voiced by Warrick Brownlow-Pike). The duo regularly present live, weekday afternoon links on the CBBC channel with Petrie voicing pre-recorded, out-of-vision announcements during the weekday strand on BBC One. On 29 August 2008, the duo went on extended leave to record a new series for CBBC - they are due to return to continuity duties on 1 December 2008. During this period, relief presenter Holly Walsh is presenting weekday afternoon links for the channel.

These logos show how the visual style of CBBC has developed over the course of its life: 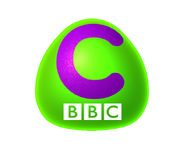 Add a photo to this gallery

CBBC extra is a free interactive television service from CBBC provided by BBCi. It is accessible from the CBBC Channel by pressing red and then selecting CBBC extra. It can also be accessed from any other BBC channel by pressing red and going to page number 570. The service differs across digital platforms, for example DSAT (i.e: Sky) viewers can access a video loop. Its availability on DTT (Freeview) is dependent upon BBCi not showing other interactive services, such as major sports events coverage.[1]

This new feature allows the viewers to play a quiz. Viewers can also send in their question which could be shown to the nation. There are 5 levels, each containing 5 questions. CBBC Quiz can be found by pressing the red button on a BBC television channel and keying in page 570. Viewers then arrive at CBBC Extra and can then select the option that reads CBBC Quiz. Alternatively, viewers can tune in to the CBBC Channel, press the red button and select CBBC Quiz from the main menu.

My CBBC is a feature to the new CBBC website. It allows the user to create their own "den" or room in which the can furnish. It is also possible to create your own avatar. The new feature is heavily promoted on the CBBC Channel.

Adventure Rock (previously named CBBC World) is a virtual online world that launched on 1 March 2008. Press releases have stated "it would allow digitally literate children the access to characters and resources they had come to expect. Users would be able to build an online presence, known as an avatar, then create and share content."

The emphasis on the system is on safety and responsibility, with no chatrooms or the financial aspects available in other online worlds such as Second Life.

Retrieved from "https://cbbc.fandom.com/wiki/CBBC?oldid=8895"
Community content is available under CC-BY-SA unless otherwise noted.