See How They Run is a six part Television mini series which appeared on CBBC in 1999.

The programme is about a family who have to leave their home because of the gorgan wants to kill them so they are on the run. There are two schoolgirls in the family so it is hard for them as they have to have a different identity and they have to keep moving schools. The show lasts for about 6 episodes and in the end they end up in Australia.

A six-part thriller about a family in the Witness Protection Programme who are uprooted from a small village in Northern England and transported to Sydney. Based on the best selling novel by Australian writer David McRobbie.

Emma Cassidy (Katie Blake) returns to her Manchester home from her boyfriend’s to find two unmarked police cars parked outside her house. Her mother, Lily (Anne Looby) and her sister Nicola (Becky Simpson) are in one and her father, Don (Peter O’Brien) is in the other. Emma is bundled into the car with her father and whisked away. It transpires that Don has unwittingly been the accountant for a major drug mogul. The police need Don to give evidence against the drug baron. This means that Emma and her family must be placed under a witness protection program. Now, if anyone asks, she is Emma Morton. 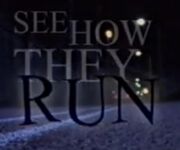 Titles
Add a photo to this gallery

Retrieved from "https://cbbc.fandom.com/wiki/See_How_They_Run?oldid=5196"
Community content is available under CC-BY-SA unless otherwise noted.